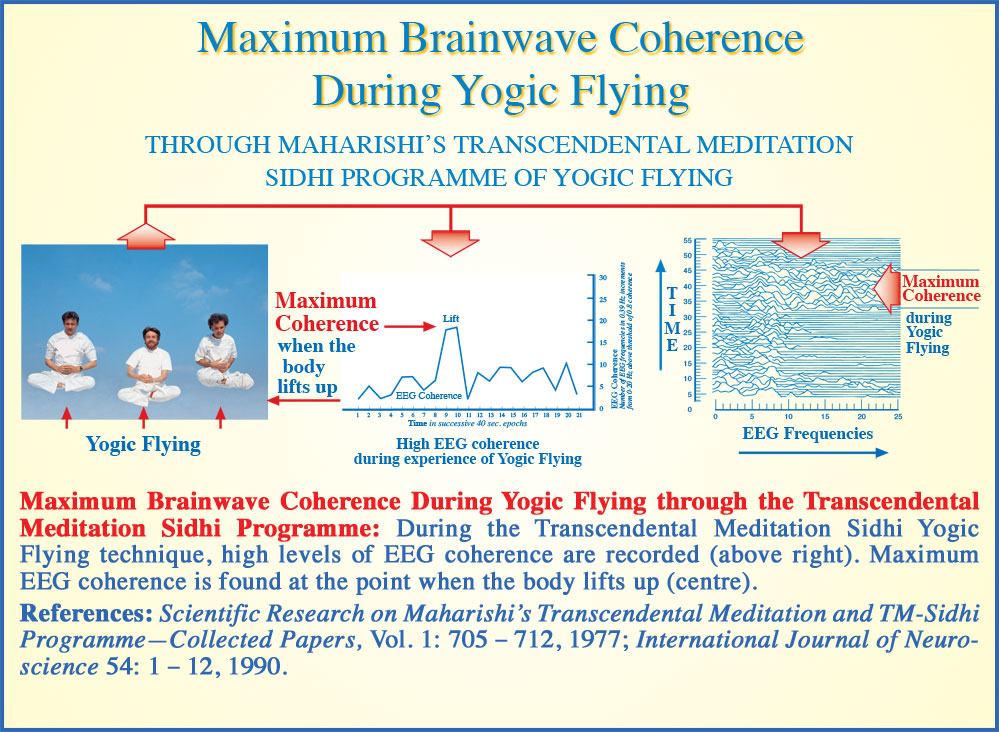 To Develop Higher States of Consciousness, Bring Life into Accord with Natural Law, and Create Heaven on Earth

'The TM Sidhi Programme is the key to heavenly life on earth. This is because it trains the conscious mind to function from bliss consciousness, the self-referral state of pure consciousness, which is the total potential of Natural Law. It trains the awareness to function in the same self-interacting style as the intelligence of Nature. Functioning from this level the individual gains mastery over Natural Law. With this perfect science and technology of Natural Law, we are in a position to accomplish anything -- we are in a position to create Heaven on Earth.' —Maharishi Ji

The Transcendental Meditation technique opens the awareness to Transcendental Consciousness, the Unified Field of Natural Law, which is the basis of everyone's awareness. The TM-Sidhi program cultures the ability to think and act from this level. By learning to function from this self-referral state of pure consciousness, which is the total potential of Natural Law, the mind gains increasing Support of Nature for the fulfillment of desires. With the TM-Sidhi program, thought and action spontaneously become more in accord with the evolutionary power of Natural Law. This results in greater skill in action -- the ability to fulfill one's desires naturally while effortlessly promoting the evolution of everyone and everything.

|| Benefits to the Individual ||

One aspect of the TM-Sidhi program is called Yogic Flying. During the first stage of Yogic Flying, the body lifts up and moves forward in short hops. Subjectively one experiences exhilaration, lightness, and bliss. EEG studies show that during this practice, at the moment the body lifts up, coherence is maximum in brain wave activity. This optimum coherence in brain functioning creates perfect mind/body coordination which is expressed by the Yogic Flying. When Yogic Flying is practiced in groups, this influence of coherence spreads throughout the environment, reducing negative tendencies and promoting positive, harmonious trends in the whole society.

|| Benefits of the TM-Sidhi Programme ||

Time-series analysis showed that during three experimental periods, in Iowa, Holland and Washington, D.C., when the number of experts in the TM ® and TM-Sidhi programs approached or surpassed 7000 (approximately the square root of one percent of the world's population), there were significant global reductions in international conflicts as measured by content analysis of major newspapers. In addition, statistics from an independent data base showed that casualties and fatalities due to international terrorism decreased an average of 72 percent during the assemblies.

|| Invitation to Create Heaven on Earth ||

Heaven on Earth is being created through the complete scientific knowledge of Natural Law which is now available to everyone through the programmes of Maharishi's Vedic Science and Technology. The Transcendental Meditation programme, its Advanced Technique programme, and the TM-Sidhi programme are precious aspects of Maharishi's Vedic Science and Technology. They are the practical means to create Heaven on Earth because they develop bliss consciousness in the individual, so that no matter where one may be on earth, one is always in Heaven. Furthermore, when practised in groups, these programmes enliven positivity and harmony in Nature resulting in ever-increasing progress, happiness, success, and prosperity in the daily life of everyone in society. Therefore, you are cordially invited to practise the TM-Sidhi programme and create Heaven on Earth for yourself, your family, your community, and for all mankind.